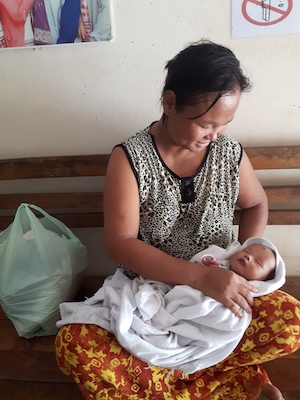 "Naw Wah" is a woman in her 30's who has lived on the border for over a decade.  One week after her first child was born she discovered the dead body of her first husband.  The staff, who know her well from the community, say she has never been the same since then. She gave their infant up for adoption because she could not cope with the painful situation. One coping mechanism that she turned to was overeating of the limited foods available to her (rice and cheap processed snacks).

She remarried and came for antenatal care at the local SMRU clinic, already severely overweight. She came regularly and was a familiar cheerful face around the clinic where the midwives and counsellors gave her frequent additional counseling on diet and general pregnancy health.  Due to very poor social support at home, she lived at the clinic for over a month at the end of her pregnancy.  Despite her incredibly hard life, she was able to care for herself and was notably
cheerful at all times.

At the end of her pregnancy she experienced complications of her obesity leading to a difficult labor. The midwives at the clinic supported her through hours of labor, but could not achieve a safe normal delivery and so arranged for referral to the local Thai hospital for an emergency cesarean section. At that time she had no attendant at the hospital, and the clinic administrator negotiated a special arrangement in which the Thai hospital agreed to care for her in the emergency without any helper.  Staff went to her village the next morning to bring her husband to the hospital to support her. Though agreeable and not unkind, he has limited capacity, and has often been missing at moments when she needs support.

Her infant required further care at a specialist hospital. When Naw Wah returned to the SMRU clinic, the staff helped her express breast milk for her sick neonate and sent the milk to the specialist hospital until mother and baby could be reunited.

Unfortunately, before the baby was discharged from the specialist hospital, Naw Wah was readmitted to the local hospital with complications of the cesarean section. Once again, staff traveled to her village to ask her husband to support her in the hospital. Extremely limited support from family and friends in the area meant that there was no relative available to take the baby home from the hospital when he was ready for discharge.  With the consent of Naw Wah, an SMRU staff member brought the baby back to his mother. As she required a second surgery at the time of his discharge, the midwives watched the infant themselves for 24 hours at the clinic, keeping him in the staff work room until she was well enough to care for him.

The midwives are continuing to work with Naw Wah as she heals from this difficult delivery. They are working to link her with a local organization (Global Child Advocates) that specializes in supporting families who are risk to empower them to care for their own children. With this collaborative help between Thai hospitals, border free clinics, and local charities, we hope for a happy outcome for this woman who has endured so many tragedies.

Tags:
story from the field